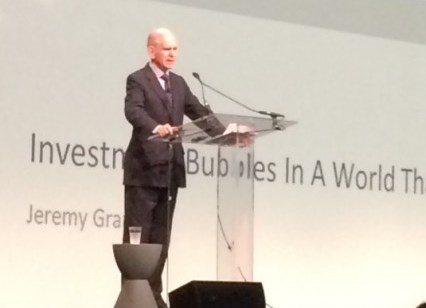 Before launching into his formal keynote presentation at the 2015 Morningstar Investment Conference, GMO chief investment strategist Jeremy Grantham ticked off the top 10 issues on his mind today.

"In my current role, I'm totally free to obsess about important issues that interest me," he said. And here they are, fleshed out a bit with some quotes from Grantham's commentaries:

1.  The limitations of homo sapiens. "I'm not pessimistic," Grantham said. "It's you who are optimistic." He said we humans have a wicked capability for avoiding unpleasant information and denial of facts.

2.  Longer-term resource limitations... "Mainstream economics continues to represent our economic system as made up of capital, labor, and a perpetual motion machine. It apparently does not need resources, finite or otherwise," Grantham wrote in a recent commentary. "Mainstream economics is generous in its assumptions."

3.  …Especially oil limitations. Expanding on No. 2, Grantham called out oil as a particular concern. "It has driven civilization, and now we're running out of cheap oil," Grantham said. "It will be a stress to the economy."

4.  Climate change. This along with natural resource limitations will further restrict the globe's ability to sustain growth, in Grantham's view. From his first-quarter commentary: "So what the Malthusians are saying, to make it very clear, is that even without considering the growing economic and environmental damage of climate change, the loss of cheap fossil fuels on its own would risk stranding us far beyond our ability to sustain our eventual population, unless, say the semioptimists like me, we race forward in renewables to the very best of our abilities. Then we might just make it in good shape and have a new, bearable climate equilibrium in the bargain."

5.  Food shortages. Exacerbated by weather problems is the potential for food shortages. "In the future, as the population grows and erosion and weather problems increase, our surplus agricultural output will decrease, making it increasingly painful to make the transition to sustainable farming. Yet, failure to move toward sustainable and less resource-intensive agriculture will mean that many poorer countries, particularly those with rapid increases in population, will begin to starve," Grantham wrote in his first-quarter letter. This in turn will lead to unrest. "There are some indications that in some parts of North Africa and Sub-Saharan Africa this process has indeed already begun. The crowds marching into Tahrir Square in the Arab Spring, for example, were apparently chanting, 'Bread! Freedom! Justice! Bread! Freedom! Justice!' But bread was first."

6.  Income inequality. Grantham added it to the list of factors dragging on growth. He didn't elaborate on this point much during the presentation, but has written about it: "… [t]he U.S. continues its odd and long history of flowing all economic gains to corporations and the very rich and basically none to the average hour worked. Therefore, it should come as no surprise that we are facing weak demand," he wrote in a 2011 commentary. "If we want to dig out of our current morass, don't we have to change this equation and isn't the most direct way of doing this to divide the pie more evenly? That would mean lower income and sales taxes for the bottom 75% of earners and higher taxes for the top 10%! … I am not suggesting that we become some goody two-shoes Scandinavian country. But how about going back to the levels of income equality that existed under the Presidency of that notable Pinko, Dwight Eisenhower."

7.  Pressure on GDP in the developed world. "Negligible growth in population and man-hours offered to the workforce is the most important brake to growth, with a net drop of fully 1% from the pre-2000 trend," Grantham wrote. "Less capital investment and growing income inequality do not help."

8.  Corporate responsibility (or lack thereof). Grantham said we're facing a loss of corporate stakeholders. Once upon a time, corporations looked after their workers and the city, state, and country where they operated. "Now it's all about profit maximization," Grantham said. In addition, today's "stock option culture" has been a drag on economic growth. "We buy stock rather than buy a new plant."

9.  Deficiencies of the Fed. The Fed has a "bad job description, badly executed," Grantham said. "It has created a steady stream of bull markets that end badly," even as "they brag about the wealth effect and their ability to push up stock prices."

10.  Investment bubbles. Grantham said we're not there yet, but we're well on our way as valuation levels approach the 2-sigma event that creates the sufficient but not necessary environment for bubbles. But every bubble needs a trigger--such as deal mania or mass speculation by individual investors. Those factors are not yet present, Grantham said. "I'm going to be incredibly prudent starting closer to the election," Grantham added. "I recommend the same to you."